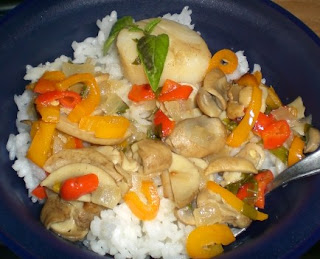 These kabobs are a big hit with my co-workers, the secret as always, is in the sauce.

For 3 pounds of meat: (beef, lamb, chicken, goat, it's your choice)

Mix all ingredients in a large container that has a tight-fitting lid, cut the meat into 1 1/2 inch cubes and toss in the marinade. Allow to soak in for 24 hours, shaking the container 2 or 3 times to re-distribute the sauce.

Alternate the meat cubes on skewers with veggies of your choice.

Remember, the softer the veggie, the less time it takes to cook through.

I like to put garlic cloves, onion wedges, squash and pepper on the skewers with the meat and the mushrooms, tomatoes and pineapple chunks on separate skewers, as they take very little time to cook.

Of course you've already got the grill going and it's nice and hot by the time you get the food skewered, so now you put a few of them on the grill, turning them every few minutes until the meat is nicely seared and the veggies begin to soften.

On the top shelf of the grill, place a 1 - 2 in deep baking pan to put the almost done kabobs in as you sear the rest of them. Once they're all seared, including the soft veggies, put the pan directly on the main grill and close the cover.

Go have a beer, cool off for about 30 minutes.

Open the grill and (wearing hot-mitts) remove the pan.